Hartford, CT – A Connecticut teenager — who has been identified as Kaitlyn Renee or “Kay Kay” — had the audacity to deface an elaborate Nipsey Hussle mural with a can of black spay paint over the weekend.

The person filming it, who Twitter has accused of being in on the stunt, stood there and laughed as the aspiring vandal took selfies with the damaged wall.

Twitter sleuths noticed the suspect tagged the letters “SK” on the mural, which are the same letters on the back of the woman’s t-shirt watching the whole thing go down.

Anyway, this pic is floating around on Twitter & IG, ppl r saying it was 4 clout. Shawty in blue said don’t get his face, you can get over there & didn’t stop her… What do you think? #NipseyHussle #mural #Hartford #hophop #rap #EntertainmentNews pic.twitter.com/peOIBJciNv

“Kay Kay” took to social media to defend herself after she received death threats.

“Y’all really mad,” she wrote. “I ain’t boutta argue with none of y’all over some PAINTING. you know how much dope shit in heaven park gets painted over? Oh alright then hop off. Yah Boutta “kill” me over a painting. That shit is hilarious.”

She added, “Who’s a bitch? Not I. no disrespect to Corey [artist] y’all was just coming out y’all mouths WAY TOO much so I did what I did.” 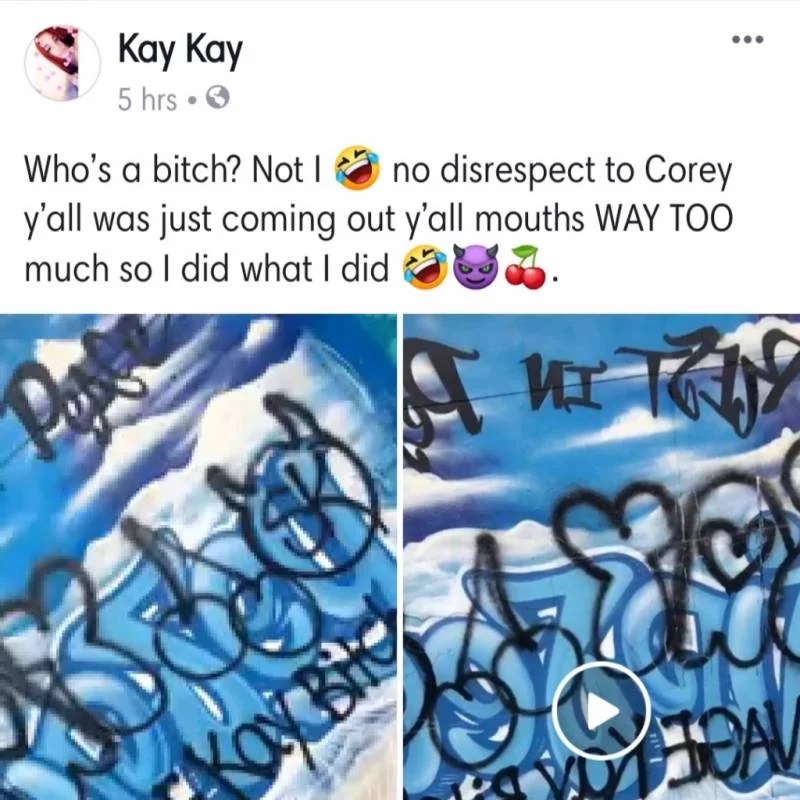 Nip, of course, was murdered on March 31 outside of his Marathon Clothing store in South Los Angeles. His death set off a ripple effect of sorrow and anger across the entire Hip Hop community.

Naturally, fans of Neighborhood Nip are seething over the disrespectful act and took to Twitter to voice their outrage.

Check out a few of the reactions below.

She hella disrespected #NipseyHussle mural by spray painting over it and then took a selfie…Baby girl had action at knocking her out didn't do anything! When are we going to realize that they aren't our allies or associates?#PayAttention pic.twitter.com/0I2KxFgBj3

The young broad that spray painted on a #NipseyHussle mural in Hartford Connecticut. Smh negativity is what they’re about and fame is what they want. Here you go. pic.twitter.com/vKC4IueQEh

People fuckin suck. This dude painted a beautiful Nipsey mural in Hartford, CT and some bitch just went live on Facebook drawing dicks all over it. 🤬 pic.twitter.com/9N14RZg7jU

Shit is disgusting. Why would anyone have a problem with his mural? Same shit with Prodigy

Nowadays all anyone does is tape shit. You don’t have to fight her 1-2 ppl could detain her til cops get there.

Yo real talk, if you defacing @NipseyHussle mural .. you a trash ass bxtch. Let me say once again, what are you proving??? Y'all some disrespectful ass bxtches #RIPHussle