NICKI MINAJ ACCUSES YOUTUBE OF SABOTAGING ‘LIKKLE MISS (REMIX)’ VIDEO: ‘LYOR IT BETTER NOT BE YOU’

NICKI MINAJ ACCUSES YOUTUBE OF SABOTAGING ‘LIKKLE MISS (REMIX)’ VIDEO: ‘LYOR IT BETTER NOT BE YOU’

On Monday (September 26), the Grammy Award-nominated rapper issued a series of Instagram posts, blasting the video sharing platform for what she believes is an attempt to sabotage the video. She included a screenshot of an email she received from YouTube informing her she’d violated the community guidelines.

“This was done to stop us from getting a lot of views in the first 24 hours,” she wrote. “The DUDS at my label allow ppl to use my videos all the time to promote weak shit but said we can’t buy promo for my videos. @YouTube @YouTubemusic it’s time y’all tell ppl that you’re in bed with a whole RECORD LABEL & MNGMNT COMPANY!!!!!

“HOW LONG HAVE YALL BEEN PLAYING THE NUMBERS GAME TO LIE & PRETEND PPL R DOING ‘GOOD’ WHEN THEY R NOT?!?!? HOW MUCH AD SPACE DID THESE DUDS PURCHASE TO BE PROMOTED ON MY CHANNEL IN THE LAST 5 YEARS?!???!!!!”

In another since-deleted post, Nicki Minaj suggested former Def Jam president and current Global Head of Music at YouTube, Lyor Cohen, was possibly at the root of the issue.

“Imagine this,” she continued. “They restricted my fucking video but have things a million fucking times worse on their BOGUS FKNG PLATFORM. This is what they do to keep you from winning while doing ads for other ppl and posting FAKE FKNG STATS because of the same ppl who run YouTube are in bed with a certain record label and mngmnt company. GO SUCK OUT YA MUDDA BIG PUM PUM. LYOR IT BETTER NOT BE YOU.”

After a couple of hours of harassment from the Barbz — Minaj’s endlessly devoted fanbase — it appears YouTube had a change of heart. Taking to her Instagram Stories, the Pinkprint artist shared a screenshot of a post from the “Barb Room” that claimed the age restriction had been lifted.

Minaj added: “FUCK THEM DUDS. THEY CAN’T GIVE US BACK OUR FIRST 24 HOURS CAN THEY!?? SO MISSION ACCOMPLISHED.” 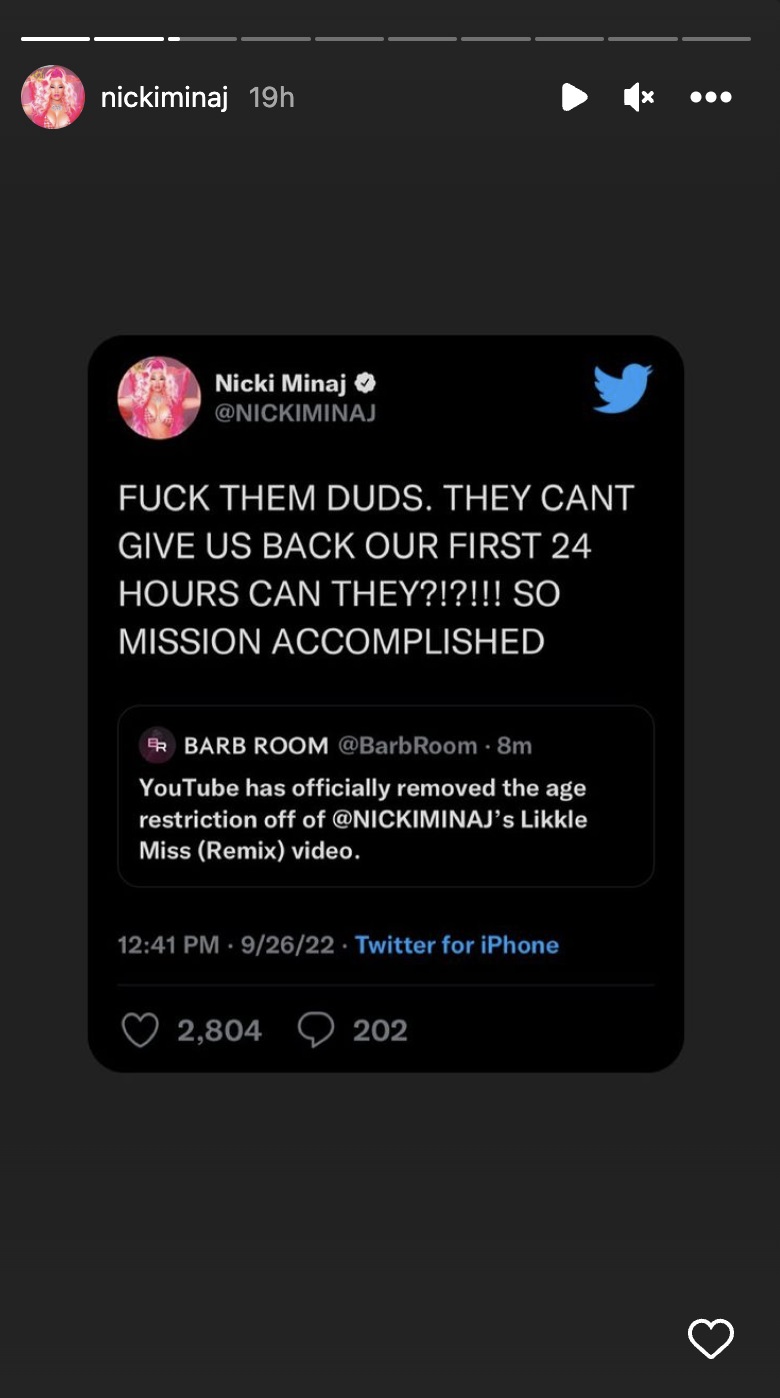 The track is taken from Nicki Minaj’s Queen Radio: Volume 1 compilation and follows the massive success of “Super Freaky Girl,” which debuted at No. 1 on the Billboard Hot 100, only the second single solo song by a female rapper to do so after Lauryn Hill’s 1998 single “Doo Wop (That Thing).”