When the weight of the world is on your shoulders, you have two choices: bend to its will or hold it steady. Emekwanem Ogugua Biosah Jr., popularly known as Houston rapper Maxo Kream, may be strong in stature, but he carries even more fortitude mentally. He’s had to, losing his younger brother Money Madu to gun violence back in March 2020 and recently being blessed with his first daughter.

“I got my family on my back,” the rapper tells Billboard over Zoom. “I just lost my brother, just had a daughter. I got the whole Clicc, the music s–t, the clothing line. The weight of the world, but I’m not saying it’s too heavy. I’m just letting them know how heavy it is.”

Growing up in the streets of Houston, encountering legal troubles, and pursuing music have also played a pivotal role in Maxo’s growth. All of these experiences inspired him to value his mental health and advocate for all Black men to prioritize theirs. “The number one killer of Black young males is homicide,” Maxo says. “I feel like a lot of mental issues–there’s a lot of trauma there and PTSD from war. That should be looked at instead of frowned upon. I feel like we should tap in and really try to conquer that.”

The title of Maxo’s latest effort, Weight of the World — released this past Monday (Oct. 18) — is appropriate as it arrives not only at a unique time in his life but for the world at large. Obviously much changed for him personally, but we are all still reeling from the stoppages caused by COVID-19, despite the fact a new normal has been created. In the time before vaccinations and loosened protocols, the Roc Nation signee took the time to be more thoughtful and strategic on his third studio album (and second under RCA), after a two-year hiatus following 2019 breakout album Brandon Banks.

“The whole COVID [thing] gave me more time to really go deep and seep into my music,” he says. “Everything planned out perfectly, I feel like it’s the perfect time — and after this, stay on these folks’ neck.”

The 16-track Weight boasts guest appearances from fellow Houston artist Don Toliver, Freddie Gibbs, A$AP Rocky, Monaleo, and Tyler, The Creator, the latter showing up on second single “Big Persona.” Billboard connected with Trigga Maxo to discuss the new album, touring with Chief Keef in 2014, and how his track “Oh Wow…Swerve” on Revenge Of The Dreamers 3 came together.

I definitely want to congratulate you on the birth of your daughter. What has fatherhood taught you so far?

Iron sharpens iron. I’ve already been in a leader role, cause I’m the head of [clothing brand] PERSONA and head of [the label] Kream Clicc, for the music. Everything going on over here I’m the head of — but this just makes me want to sharpen up and take it to the next level, that’s all.

We’re speaking on October 11th, which is World Mental Health Day — -one of my favorite days. Your music is very personal; you get into your struggles and your victories. What’s one thing or phrase that you keep in mind as you navigate life and try to maintain your mental while also succeeding?

S–t, it’s a marathon, not a race. Go on my time. We move when we move. It was people dropping during the pandemic, but it just wasn’t my time. I had to get my structure right — but we noticed on top of that, my music is very therapeutic. So with it being Mental Health Day, that fight is very important, because it gets overlooked especially with Black men. The white man can have a mental illness, but the Black man is looked at as we crazy, or just animals. It shouldn’t be like that.

We are humans; we all cry, we all smile, we all have s–t, whether you a gangster or you’re on Wall Street. So addressing mental health — prevention is better than curing. Understanding that you have that can go a long way. 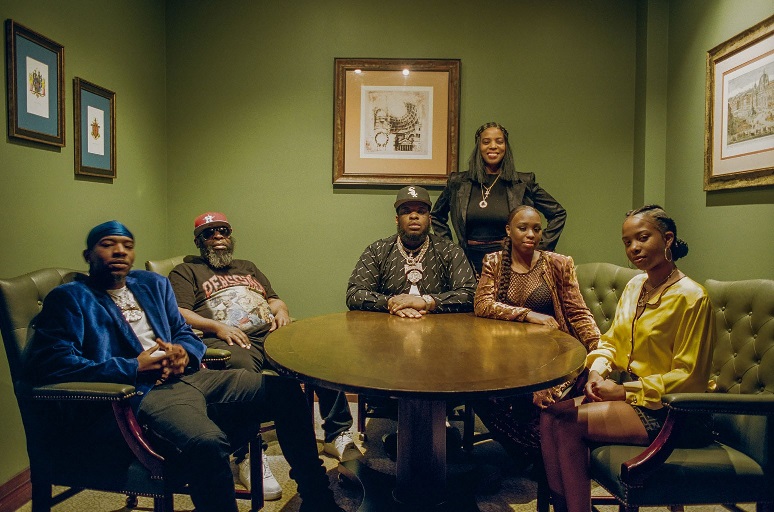 So, the album: You got a feature from A$AP Rocky on “Streets Alone,” who has obviously been really embraced by Houston. He hasn’t really been doing too much of the music stuff lately though, so how did it feel to get that Rocky feature in 2021?

That s–t cool. Rocky is my n–a. He’s been f–king with us since I first started rocking — like my first Hip-Hop co-sign ever was [A$AP] Yams. That’s bro. Everything I do got to be genuine — like I know it’s music, and you’re supposed to “link up,” but everybody I work with, it be genuine. They understand my mission and what I’m trying to accomplish.

Another standout track was “What I Look Like” featuring Freddie Gibbs. Freddie Gibbs has been rapping his ass off for the entirety of his career. What did it feel like getting that verse from Freddie and would you say that’s one of your favorite verses on the project?

Hell yeah, I f–k with it. Getting that verse from Freddie — it was like, n—as don’t even know. I don’t even talk about it, he don’t like me talking about it, but it was a time when I was up and coming — Lambo [manager Ben Lambert] and Freddie Gibbs, I reached out to them, and we was actually talking about signing. You know, I went my own way for my own reasons, but I f–k with Freddie Gibbs. His mindset, he a man ten toes down, and he’s himself. He don’t give a f–k, so I f–k with him.

I was really intrigued by the song title “Cripstian.” Can you describe that a little bit — or do you want to leave that up to the people to interpret on their own?

It’s like I said in the song, “Prayed at night like, ‘Father God, is there a heaven for a G?’/ Jesus Christ could walk on water, Imma Crip walk on the sea.” It’s showing that dual reality–gang banging and religion. It’s a contradiction because you idolize God, but you idolize this gang banging the same way you idolize God. See, this is why I don’t be wanting to break it down like that! [Laughs.] I feel like if I break “Cripstian” down like that they gon’ see how I’m looking at it, and how I’m putting it together.

It’s a contradiction and a reality at the same time, it’s crazy. It’s certain songs people praise about killing opps — which is killing other African-Americans. At the same time, you’re putting God first, but one of the No. 1 sins is killing. A n—a will go kill and do the devil’s work, but won’t worship the devil, so praise God. It’s a whole contradiction in itself, but at the end of the day, it’s a reality.

You mentioned in your Complex interview with Andre Gee that every project you put out teaches people about the previous project and about you as well. What do you want Weight of the World to teach people about Brandon Banks, Punken, and all of your mixtapes?

I mean, s–t, I could give you a brief disclosure of what’s going on — but they won’t fully get it until they tap in. It’s like the Harry Potter series, Pokemon, or Dragon Ball Z. You got to tap in, you got to know what the f–k going on. Or like Power! You can’t hop in the last season when Ghost dies, you got to understand what the f–k going on, the plot twists, all that s–t. I’m the kind of artist where you got to dive into the catalog to get it.
I mean, don’t get me wrong, some people gonna tune in and just love it, f–k it, and want to know more so they’ll backtrack and study, you feel me? I really paint pictures with this s–t.

I know you toured with Chief Keef back in 2014. What was that experience like and what do you feel it did for your career?

It was cool. I mean, it was a Texas tour, but it just showed me how similar me and Chief Keef was — because he couldn’t perform in Chicago and I got shut down in Houston for gang activity and all kinds of dumb s–t. Like, they didn’t understand how Crip n—as could have white boys doing mosh pits. They not gang members, they’re ragers. They wanted to turn up.

So it must’ve felt great to perform at this past Pitchfork Music Festival, with all this in mind.
It was cool, I loved it. It was a lot of music heads f–ing with my s–t, raging but also singing it back word for word. That means a lot to me. I just love–like J. Cole for example. I went to his show last night and it was the same f–ing thing. Everybody was word for word, really into his s–t. That s–t go real far with longevity.

That’s a great segue way actually. I don’t think you’ve ever got the chance to discuss this, but how did it feel to work with the Dreamville artists on Revenge of The Dreamers 3, get that placement on “Oh Wow…Swerve” and just be around so many creators?

Hell yeah. I went to the camp, but I wasn’t really working. I popped in, shook some hands, and left. It was too much going on. All my s–t was personal like J. Cole pulled up on me, me and J.I.D will work or something like that. I got to be in my own area. I met a lot of good people: Isaiah Rashad, all the producers I worked with… A lot of good s–t came out of it but when I work I like to be isolated. Some one-on-one s–t with my people so I can control the narrative.

I don’t like all the hopping in and out of studios, n–s being thirsty for tracks. Cole pulled up on me and we vibed. We ain’t even work, we just vibed. It was great to get that game from him.

You make a lot of WWF/WWE references in your music. Who is one of your favorite wrestlers of all-time?

I f–k with Triple H hard. I f–k with X-Pac hard. I like Stone Cold for sure. The Rock. Stone Cold and the Rock gon’ whoop your ass — but Triple H was more slimy grimy… That’s kind of how I move, me and my n—as mobbin’ on s–t like “Nah, f–k this company.” I also f–k with Triple H because he stole Test’s b–h — sorry, woman — Stephanie McMahon. HHH was doing his thing for sure.

You’re a very expressive and insightful dude. Would you ever consider going into podcasting or TV?

I’d do all that s–t. I would act, get into all that s–t, you know what I’m saying? Be a household name for real, I could do that, but I got to fix my [vocabulary] though. I got a potty mouth. I got to stop cussin, I got a very Bernie Mac mouth. But that’s the realness and the rawness when it comes to Maxo.