Kanye West Issues A Warning To Adidas: “I Been Nice Til Now”

Kanye West Issues A Warning To Adidas: “I Been Nice Til Now”

Despite Kanye West saying last week that “there’s a possibility” of coming to an agreement with Adidas, now the gloves are off.

Kanye West announced it’s time to “get your popcorn,” after sending a message to Adidas, warning them playtime is over.

Last week the Yeezy founder suggested that there’s a chance he and Adidas can salvage their working relationship. However, Ye is back on the offensive now. Kanye West has been engaged in a feud with Adidas and the company’s CEO Kasper Rørsted since the summer.

During a recent interview, Kanye West said they can still come to an agreement despite his accusations that Adidas is ripping off his designs.

“There’s a possibility (we) can co-parent products that we make,” Kanye explained to Forbes. “But not in a way where I’m not getting say-so over colorways, and where they’re treating me like I’m dead,”

However, the rapper turned designer returned to addressing the brand via Instagram on Monday (Sept. 26).

“Adidas,” Kanye West wrote in a message on his IG Story. “You talk to me first about any decisions about Yeezy.”

Ye then informs, “I been nice,” up to this point, but “this is for my kids now.” He said he’s also fighting for “every creative kid that ever was bullied.” 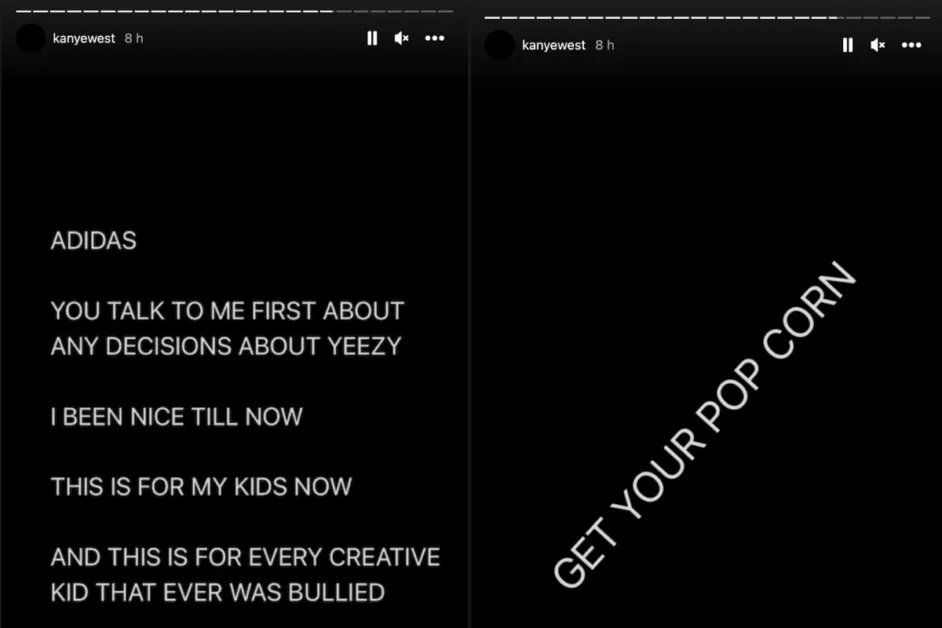 When speaking to Bloomberg earlier this month, Kanye West said he would continue to build his fashion empire independently, without Gap or Adidas.

“It’s time for me to go it alone,” Ye explained. “It’s fine. I made the companies money. The companies made me money. We created ideas that will change apparel forever.”

“Magically No production companies have been willing to produce my YZYSZN9 fashion show in Paris on October 3rd,” he wrote.