It’s a well known fact Eminem isn’t a fan of Donald Trump. In 2017, he dropped a scathing freestyle for the BET Hip Hop Awards that took heavy aim at the current POTUS. At some point after the awards ceremony, he was allegedly questioned by the Secret Service, but the agency wouldn’t confirm.

This week, the agency finally turned over 40 pages of documents, proving they did speak to Em based on “threatening lyrics” from the song “Framed,” which was featured on Revival. The Secret Service characterized Shady as “exhibiting inappropriate behavior” and mentioned he “threatens protectee” in the song. 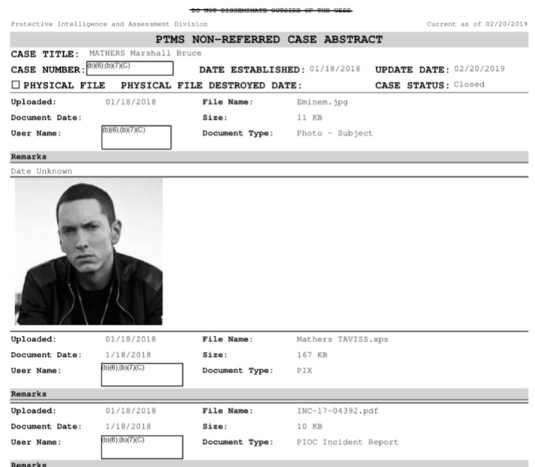 The documents state on the day Revival was released — December 15, 2017 — “a concerned citizen reported Marshall Mathers the rapper ‘Eminem’ had a new song called ‘Framed’ with an inappropriate comment towards President Donald Trump and a threatening comment towards Ivanka Trump.”

The “concerned citizen” was allegedly a TMZ employee, who took it upon themselves to send the Secret Service an email with a link to an article in The Hill about the song.

“I want to know if your agency is investigating Eminem for his threatening lyrics about First daughter Ivanka Trump,” the person wrote.

The TMZ employee appeared to be seeking comment from the Secret Service. Only hours before the email was fired off, TMZ ran a story about Em’s lyrics criticizing Trump.

The heavily redacted Secret Service documents also explain, “The song was about a murder that he could remember and must be ‘framed’ with the specific lyrics, ‘Donald Duck’s on as the Tonka Truck in the yard/But dog, how the fuck is Ivanka Trump in the trunk of my car?/’Cause I feel somewhat responsible for the dumb little blonde Girl/That muthafuckin ‘ baton twirler that got dumped in the pond/Second murder with no recollection of it.”

Revisit the “Framed” lyrics in full below via Genius and find the entire report here.

Read “Framed” by Eminem on Genius