DRAKE FIRES BACK AT ANTHONY FANTANO OVER FAKE DMS: ‘YOUR EXISTENCE IS A LIGHT 1’

DRAKE FIRES BACK AT ANTHONY FANTANO OVER FAKE DMS: ‘YOUR EXISTENCE IS A LIGHT 1’

Drake has responded to music critic Anthony Fantano after he posted alleged direct messages from the rapper.

Fantano, who runs the YouTube channel The Needle Drop, shared a video on Thursday (September 15) showing messages Drizzy allegedly sent to him on Instagram about making vegan cookies.

“Anthony! It’s Drizzy,” the message began. “I know we don’t really see eye-to-eye about music and that you are not the biggest fan of most of my albums (thanks for the kind words on Take Care and If You’re Reading This tho). But it is what it is, you know. Can always hope you’ll like the next one!”

It continued: “But I’m not messaging you about your videos. I’m actually messaging you cause I found a really great vegan cookie recipe I’d love you to try!”

The next message included a step-by-step guide to making vegan cookies including all the ingredients and instructions.

“I’d really appreciate it if you could give this a spin and let me know if it’s worth trying myself!” the message signed off. “Appreciate you! Drizzy out!”

Just hours after the video went live, Drake took to his Instagram Stories to fire back at Fantano, sharing real messages he had sent to “the Internet’s busiest music nerd.”

“Your existence is a light 1,” he wrote. “And the 1 is cause your alive. And cause you somehow wifed a black girl. I’m feeling a light to decent 1 on your existence.”

His messages reference the rating system Fantano uses for his album reviews. 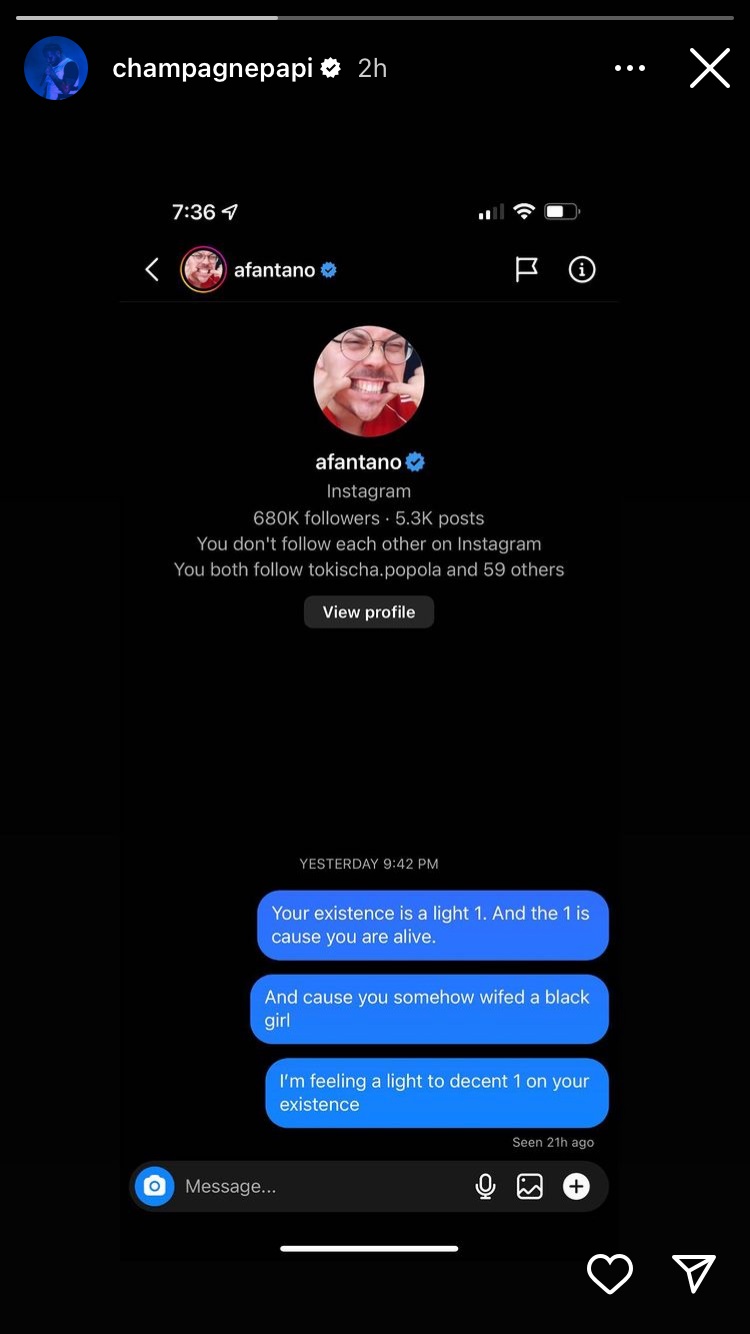 Following Drake’s response, Anthony Fantano went on Instagram Live to speak on the exchange, taking jabs at Drizzy for being “salty” and “in his feelings.”

“He was in his feelings Wednesday night, very late into the evening, I was in this garage lifting some weights when I caught a DM request from Champagne Papi himself. I saw the DM request and I looked at it and yeah, it was a bit of a diss. It was a salty little DM, it was quite sad and unfortunate.”

Fantano also called Drake “obsessed” for knowing his rating system and took shots at him for his alleged use of ghostwriters.

“A couple of things were running through my head,” he recalled. “One: ‘Why is Drake messaging me? I’m not 18 years of age. That’s kinda weird.’ Second thing I was thinking: ‘This man is familiar enough with me to know my rating system. Seems a little odd, seems a little obsessed.’

“The other thing that I was thinking is that, why did he say the ‘light one’ thing twice? Is that him trying to work a chorus into his song, is this a bit of a rough draft or something? I don’t know why he said that weak ass line two times. It also made me think, this is why he has ghostwriters.”