One of the most uplifting events to take root during COVID-19’s stay-at-home mandates was D-Nice’s Club Quarantine. The DJ’s game-changing live sets became a culture-raising fixture on Instagram for celebs and music fans alike over the last year, attracting millions thanks to his masterful curation of R&B, soul and hip-hop classics. Last night (Aug. 29), D-Nice brought his online party to the Hollywood Bowl — and kept the house rocking for three hours.

The first stop in a road show series staged in partnership with Live Nation Urban (next up: Brooklyn, Sept. 2; Atlanta, Sept. 3), Club Quarantine Live at the Bowl co-starred Common, the Isley Brothers, Deborah Cox and Trey Songz, among others. Donnie Wahlberg and Chris Spencer co-hosted the sold-out affair during which D-Nice’s deft spinning coupled with the artists’ lively and passionate performances kept the exuberant crowd on its feet the entire time.

A pre-show video montage featuring comments from Club Quarantine fans not only set the evening’s tone but also paid homage to D-Nice for the relief, hope and fun his trips down memory lane provided as the pandemic and social unrest took their toll. Noted one fan, “I don’t know how I would have made it; [Club Quarantine] was a sanctuary.” Added another, “Club Q gave me a new ideology of what life is … If you stay authentic, humble and true to yourself, good guys will always win.” 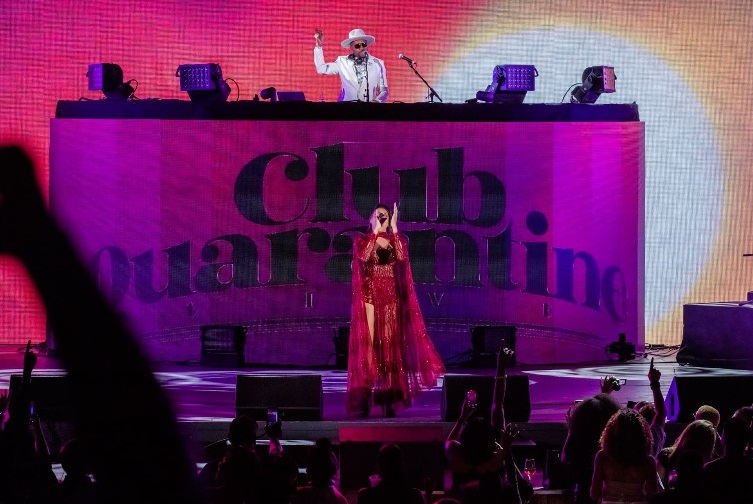 Holding court atop a tall platform wearing a white suit and ever-present hat (starting with gray and changing later to red), good guy D-Nice kicked off the show with Sister Sledge’s fitting “Lost in Music.” From there he segued into a medley that had the Bowl audience singing along at the top of their lungs: Stevie Wonder’s “Do I Do,” Prince’s “I Wanna Be Your Lover,” Mary J. Blige’s “Just Fine,” Patrice Rushen’s “Haven’t You Heard” and Michael Jackson’s “Wanna Be Startin’ Somethin’.” Between his solo spins, D-Nice welcomed special guests into his VIP section: two white couches located on each side of the stage.

Deborah Cox had fans cheering ecstatically during her powerful performance of her hits “Sentimental” and “Nobody’s Supposed to Be Here”; surprise performer Tank (previously announced artists Amerie and Carl Thomas didn’t appear) winningly crooned his way through a sexy and grown set featuring “Maybe I Deserve,” “Please Don’t Go” and “When We.” Trey Songz raised that bar to the next level with the sensual and searing “Can’t Help But Wait,” “Can’t Be Friends” and “Neighbors Know My Name.”

Earlier in the show, emerging star Kiana Ledé sang her platinum-certified “Ex” and the vibey “Rather Be.” She’s the featured guest on the latter, D-Nice’s latest singe from his forthcoming album. Giving thanks for surviving a tumultuous year, gospel singers Karima Kibble and Erica Campbell propelled a spirited praise and worship session that included Mary Mary’s 1999 classic “Shackles” (Praise You).”

Letting his spinning and the fervent audience sing-alongs do most of the talking, D-Nice further revved up the crowd with an homage to his New York City stomping grounds (Puff Daddy’s “All About the Benjamins,” JAY-Z’s “I Just Wanna Love You [Give It 2 Me]”) and HBCU’s (E.U’s “Da Butt”). He closed the inaugural Club Quarantine Live with another Sister Sledge track, “Thinking of You (Dimitri From Paris Remix).” Explained D-Nice, “This is the song that got us — the Club Quarantine family — through the last year.” 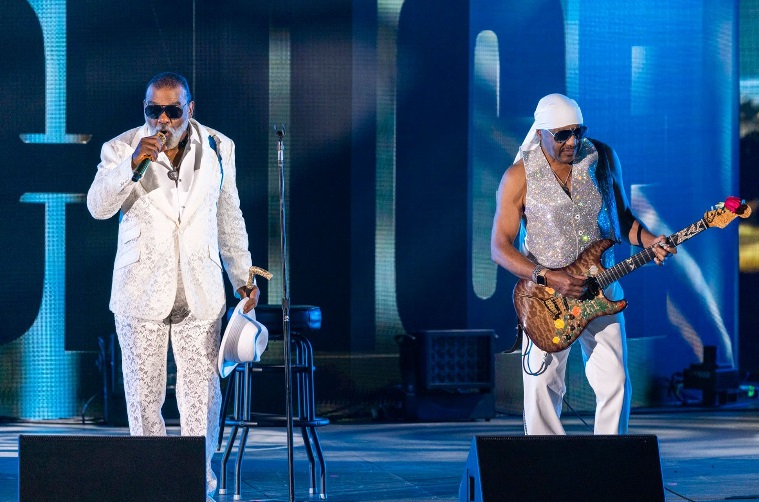 Among other choice Club Q moments:

Double Icons: Not one but two mighty legends hit the Club Q stage — the Isley Brothers and George Clinton. Garbed in a glittery cape, No. 34 Lakers jersey and silver helmet-type hat, chief of funk Clinton engaged the delighted audience with riffs on verses and choruses from three of Parliament-Funkadelic’s best-known hits: “(Not Just) Knee Deep,” “Flash Light” and “Atomic Dog.” Helping to close out the show’s last hour, brothers Ronnie and Ernie commanded the stage during a too brief, two-song performance: the sultry “Footsteps in the Dark” and seductive “Between the Sheets.” Resplendent in white — Ronnie dressed in a suit accessorized by a matching chapeau and gold-topped black cane in hand; Ernie in a white head scarf, white pants and silver vest — the siblings adeptly showed that age ain’t nothing but a number.

The Audience: It was difficult to discern who was having the most fun — the artists or the audience. But the audience perhaps had the edge. After 18 months of a forced hiatus, the party-starved crowd was ready to let loose, especially after co-hosts Wahlberg and Spencer hit the stage tot he opening beats of Dr. Dre’s “The Next Episode.” From there it was all systems go as candid shots of fans going to town dancing and singing flashed across the giant video screens flanking the stage. One such fan: This Is Us star Sterling K. Brown during D-Nice’s homage to his New York City stomping grounds with Puff Daddy’s “It’s All About the Benjamins” and JAY-Z’s “I Just Wanna Love U (Give It 2 Me).” 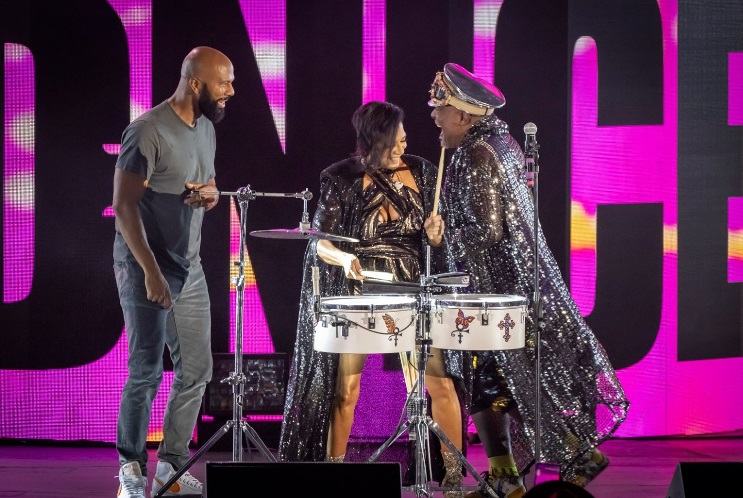 Star Trio: “This is the party of all parties, right?” declared Common who took the stage after Clinton for a strong set that included him breakdancing and performing his timeless mantra “The Light.” Then the rapper and the funk guru returned to sing along with the ever-fierce Sheila E. during her riveting take on “The Glamorous Life,” which she wrapped with a compelling, standing ovation-earning drum solo.

Salute to Biz Markie: One of the night’s most touching and ethereal moments occurred during D-Nice’s tribute to hip-hop pioneer Biz Markie. Requesting a minute of silence, the DJ/rapper proclaimed that “without Biz, I wouldn’t be on this stage right now. He inspired me to come back. So shine a light right now for Biz Markie.” The sea of camera phone lights shining across the entire venue as the crowd chanted the hook to Markie’s “Just a Friend” spoke volumes.