Bobby Brown Talks Tell-All A&E ‘Biography’: ‘This Is My Truth’

Bobby Brown Talks Tell-All A&E ‘Biography’: ‘This Is My Truth’

“Thebiggest misperception of me is that I really give a f— about what anybody feels.”

That’s just one of the many colorful declarations and insightful revelations peppered throughout Biography: Bobby Brown. At times spicy, poignant and fun — but never pulling any punches — the documentary premieres across two nights on A&E, starting Memorial Day (Monday and Tuesday, 8 p.m. ET/PT).

Seemingly nothing was left on the cutting-room floor as Bobby Brown relates how he rocketed his way out of the housing projects of Roxbury, Mass., into superstardom — first as a member of R&B/pop boy group New Edition and later as a magnetizing solo act. Along the way, he recounts his “bad boy” reputation, the origin of his signature “Gumby” haircut and love life interludes.

Also covered are Brown’s battles with substance abuse and the law, his marriage to Whitney Houston, the deaths of their daughter Bobbi Kristina and his son Bobby Junior, as well as the positive trajectory he’s on now with his manager-wife Alicia Etheredge-Brown and their children. Supplementing Brown’s storylines are interviews with family and friends plus industry peers such as Usher, Jermaine Dupri, Babyface and New Edition bandmates Ricky Bell, Michael Bivins, Ronnie DeVoe and Johnny Gill.

Married 10 years as of June 18, Brown and Etheredge-Brown are also starring in a new reality series for A&E, Bobby Brown: Every Little Step. Borrowing its title from his 1989 Billboard Hot 100 top five hit, the 12-episode series (premiering Tuesday at 10 p.m. ET/PT following night 2 of Biography) revolves around the pair’s role-balancing as a married couple/parents and business partners. The latter includes Bobby Brown Foods featuring all-natural barbecue sauces and seasonings plus a new self-care line, Regenerate Wellness.

In advance of the two A&E premieres, Brown and Etheredge-Brown sat down with Billboard via Zoom to talk about Brown’s most difficult revelation in the documentary, thoughts on the upcoming Houston biographical film I Wanna Dance With Somebody, and why theirs won’t be a run-of-the mill reality show.

After 2017’s New Edition miniseries and your bio a year later, why did you feel the need to do this documentary?

Etheredge-Brown: We’d been asked multiple times to do a documentary, but it just felt forced then. Now it feels fitting for where our journey is and how Bobby’s doing.

Brown: I don’t think I was in the right space when we were asked before. But at this time in my life, it was very therapeutic for me to dig deep into my guts; going back to the traumas of my childhood. That’s the most of why we decided to do this now.

Etheredge-Brown: When we were looking at a home for the documentary, A&E didn’t have any prior notions of what they wanted Bobby to talk about. There are so many things about Bobby’s journey in which people had never really heard his voice. It was media or other people’s conversations and opinions on how he felt during various times in his life. So it was really important that we do this with a network that would be respectful of that.

In digging deep, Bobby, what was the hardest thing for you to reveal?

Brown: Well, probably the hardest was talking about the priest who molested me when I was around 9 years old. It’s the one thing that has been bothering me for many, many years that I kept deep in my soul. But I’m glad I was able to get it out and put it on the table.

Etheredge-Brown: I was very proud and encouraged that he was really doing the work. I could see how sharing those lifted something off of him; not feeling guilt about releasing. It’s always hard to relive the loss of the children or having to hear him speak about how he was treated when Whitney passed away. It was really a difficult time. Most people have no idea or could not even imagine what Bobby went through in trying to get to his daughter [Bobbi Kristina].

Beyond the alcohol, drugs and legal issues, would you have done anything else different in your life/career?

Etheredge-Brown: I would hope that he didn’t spend so much money back then. But I know he had fun doing it. [Laughs along with Bobby]

After all these years in the public eye, is there one question you’re tired of answering?

Brown: There’s really been nothing asked that bothers me because I’ve had such a front-page life. And now I’m glad to be able to tell my story.

Etheredge-Brown: Always hearing talk about Bobby and Whitney’s relationship … People like to shine a light on the negativity, but they didn’t always have a negative relationship. Their love was real and they had a beautiful child. There were wonderful times that people don’t really care about; they just want to hear about the bad times. That gets very redundant and it’s very hurtful.

Coming later this year is Sony Pictures’ Whitney biopic. Why are people still so fascinated by your relationship?

Brown: I truly hope that they let her rest and also let our relationship rest. I don’t know anything about the biopic that Clive [music industry legend Davis, one of the film’s producers] is doing. But hopefully it won’t dive into our relationship. Hopefully it will be more about the music and not about her personal life.

Given the strong criticism that Being Bobby Brown received in 2005, what made you take the reality route again?

Etheredge-Brown: We had considered doing some type of show before this, but not necessarily having someone in the house watching us every day. We really want to highlight our work relationship, our family time and our businesses. So in that way, it’s quite different because you will see what we really do in our lives. And it turned out to be so much fun. However, we made sure that we set parameters to protect the children: If they didn’t want to work or be on camera, it wasn’t a must. You’re going to see a loving Black family with two parents living in the house with our children, which isn’t often depicted or shown. And we don’t have to be hooting and hollering at each other or doing anything crazy to have a great story to share. You’ll see a Black man who is kind, sensitive and a listener who’s working on himself. You’re going to see us go through finding tools to communicate better in our marriage and how to be better parents as we learn so much from our kids.

Brown: This is a new chapter in my life; totally different from the earlier series because of how I’m living these days. I think people will notice that difference, especially in my attitude about life.

After everything you’ve gone through, to what do you attribute your resilience and perseverance?

Brown: God. That’s who holds me down. My belief in the Almighty, prayers and my family are what keep me going. Hopefully, in watching the documentary, people will learn a lot of different things about how to deal with difficult situations and come out on the other side. I’m speaking from the heart. This [documentary] is my truth. I hope they will know that. 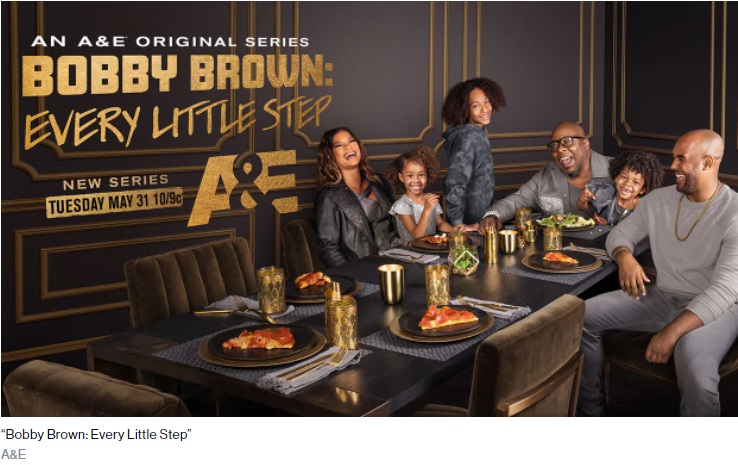