The always outspoken Bhad Bhabie found herself on the defense after she was berated on social media for rocking box braids. She initially fired off at those accusing her of cultural appropriation in one of her Instagram Stories in an attempt to flip the script.

“To all the black females that are saying my hair ain’t meant for box Braids guess the fuck what y’all hair ain’t meant to be straight but y’all glue whole wigs on to your heads and sew Brazilian/Indian/Peruvian hair which is anything like your natural hair texture at all and I don’t say a god damn thing neither do the other cultures that you get the hair from.

“And on top of that I’m not one of the ppl who has ever made fun of or said anything bad about girls with box braids or any type of braids. I completely agree that would b out of line and culture appropriation if I was trashing black girls for wearing braids hen getting them but that’s not the situation at all so leave me tf alone or imma start getting real disrespectful.”

#BhadBhabie has a message for people talking about her braids 👀👀 (SWIPE)

The Dr. Phil breakout star, real name Danielle Bregoli, later pointed out she was proud of the way she looked and proceeded to execute her initial threat.

“I love the way I look plus ya man agrees and we all know I look fine asf with any hair style I do from any culture because I’m just that bitch,” she added. “I hope y’all bald headed hoes stay up all night thinking bout this. Me and my braids are gonna sleep real good. goodnight.”

Unsurprisingly, the 16-year-old rapper’s comments were quickly torn apart and she had to issue yet another post to her Instagram Stories explaining her stance.

“Lol I knew the internet would find a way to flip what I was saying so first of all my comment was NOT directed toward ALL black women who wear straight hair only toward the black women who were saying I was trying to b black bc I was wearing braids,” she wrote. “All I did was say back to them what they said to me by saying they want to b like other cultures for wearing straight Peruvian, Indian and other hair types.”

Bhad Bhabie continued, “It’s dumb for me to say that huh? But why is it okay for someone to accuse me doing something I’m not but when I do the EXACT SAME THING back I’m wrong. And btw I didn’t call black women bald headed either that was in a whole different comment that was made about all the ppl who also had something to say about me.

“there was multiple other faces too even some white women were accusing me. And no I do not personally feel offended if black women wear a straight wig and I never even said that. idk were tf y’all get some of this shit from like why would I b bother by the way another girl decided to wear THEIR hair.” 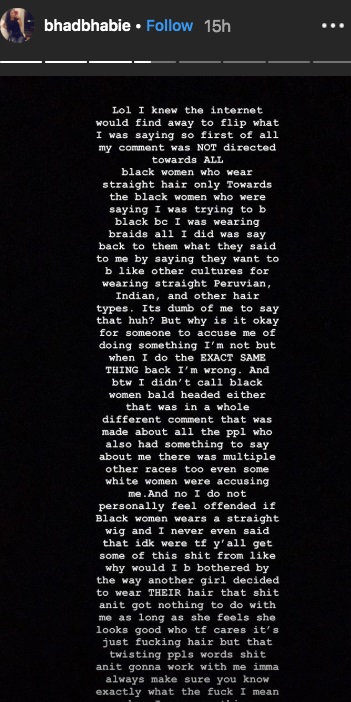