On Thursday (Aug. 27), Audiomack has announced their new online series Own the Label to spotlight Black label owners in hip-hop and their journey to the top.

Hosted by Billboard’s hip-hop editor Carl Lamarre, Own the Label will premiere at 4:00 p.m. ET on Twitch, with South Coast Music Group’s CEO Arnold Taylor. SCMG is home to DaBaby, Toosie, TiaCorine, Black Zacc, and Big Mali. Lamarre and Taylor will discuss what it takes to survive in the music industry, his numerous label stops, and more.

“SCMG is a brand that develops raw talent and turn them into mega stars. This is one thing that separates us from the rest,” Taylor tells Billboard.

“Audiomack prides itself on highlighting what’s next in music culture,” says Jason Johnson, vp of marketing and brand strategy. “In this current climate, we wanted to highlight Black record label owners who are currently impacting the culture globally and providing them a platform to tell their stories.”

This year, DaBaby notched his second consecutive Billboard 200 No. 1 album with Blame It on Baby. The album housed his first Hot 100 No. 1 record “Rockstar,” featuring Roddy Ricch. The song enjoyed over six weeks at the summit.

See the flyer’s for today’s episodes below. 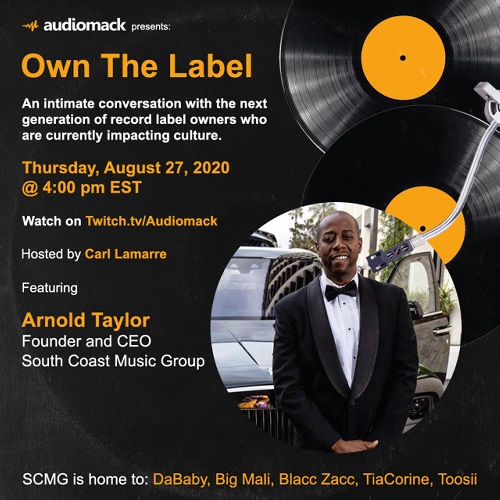